in the woods above the Strada Napoleonica

Summer is here, and the weather is hot again. Getting up into the woods off the beaten trail was nice, as always. A lot has been going on in the world and I’ve done a bit of traveling. I’ve been wandering a bit in Trieste, as well, and finally got up to tour some of the Castello San Giusto and the cathedral with some of the folks from the local Internations group.

The original cathedral was built in the 6th century, adjacent to what had been a temple of the Capitoline Triad of Jupiter, Juno, and Minerva.

Roman ruins at the cathedral and castle of San Giusto, tower dating to 1337

The original church is long gone. Two basilicas were built there between the 9th and 11th centuries, and the base of the current church and a bit of the artwork inside date back to the 12th and 14th centuries. Mosaics and paintings from several periods remain on the walls within. 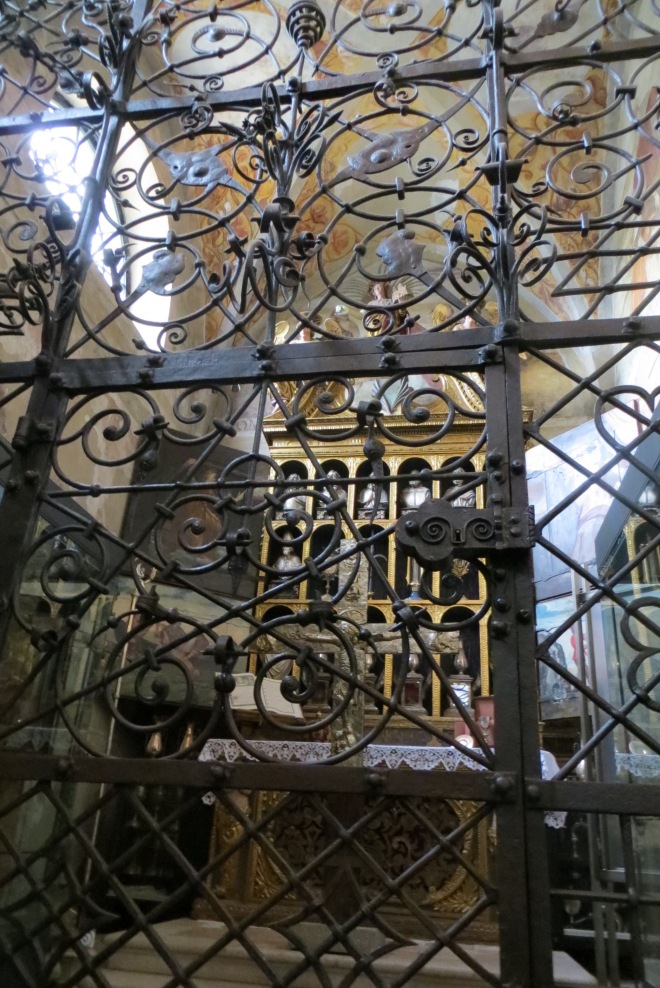 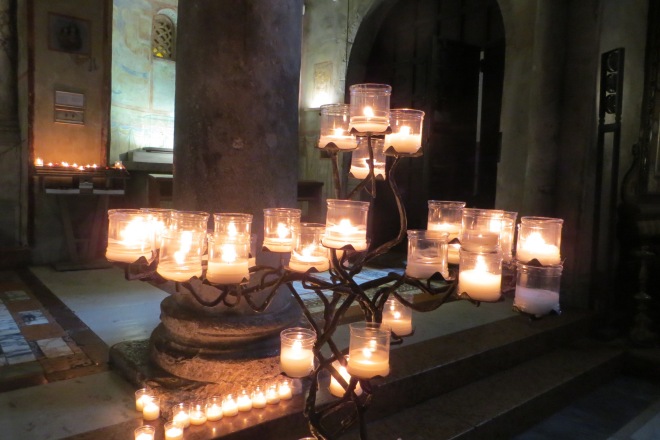 13th century frescoes from the life of San Giusto

To help preserve the artwork, lights are only turned on in some areas for a minute or two at a time if you drop a euro in the control box. The background of the mosaics in the two apses is brilliantly reflective in bronze tones, and was made by artisans from Venice and Constantinople. There is a central mosaic over the nave as well, made in the 20th century but with what look like similar materials.

The castle overlooks the cathedral and the city of Trieste. There’s a civic museum inside but the entrance for the museum and the castle are separate. I didn’t pay to go into the museum, just the castle grounds.

detail from the castle bell

Trieste and the carso from the castle

roses and lizard on the castle grounds

Trieste observatory tower from the castle

That weekend, the Amerigo Vespucci was in port. She is the oldest commissioned ship in the Italian navy, a square-rigger built in 1930 and has been used as a training vessel that circumnavigated the globe in 2002-2003. The lines to go aboard were over an hour long every day that she was in port, so I never did have a chance to go and visit her, but one of the guys I was hanging out with that day had actually sailed aboard her many years ago. Her full crew and training compliment are 480 people. 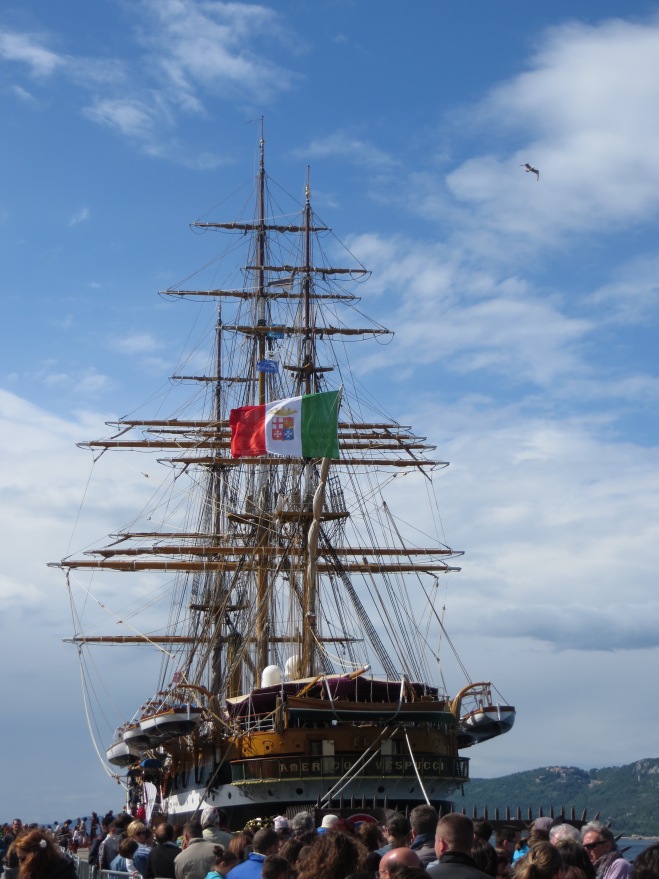 Amerigo Vespucci in port in Trieste

June brought the Cantine Aperte, and several of us met in Gorizia to head out on the wine road again. We tasted and snacked our way around the area. We stopped at one of the vinyards that had a restaurant open when we were there two years ago, but the restaurant wasn’t open this past year. They did, however, recommend a really nice restaurant not that far away.

Dave, Sere, and the antipasti

vineyard roses on a rainy day

The day was rainy, with lots of breaks between the weather. We ate inside the restaurant rather than going al fresco, which was a good choice, as a huge thunderstorm blew through while we were eating. The rain pounded down on the roof, and the people outside had to deal with the wind blowing the umbrellas around.

A couple of weeks later, we were off to Grado, a small beach resort town on the coast between Trieste and Venice. The place was packed with Austrians. It has a gorgeous sandy beach, and a lot of really lovely looking restaurants. 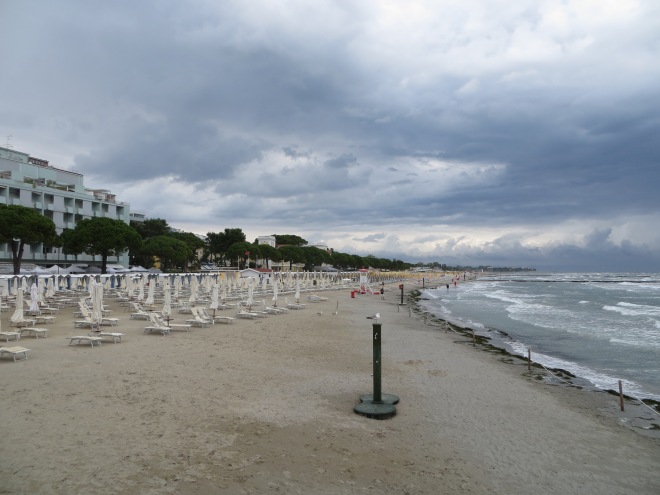 the beach at Grado

We toured the Basilica of Sant’Euphemia there, with early floor mosaics similar to the ones in Aquileia. The original basilica dated from the 4th century, though parts of the current one were built in the 6th and 7th centuries. 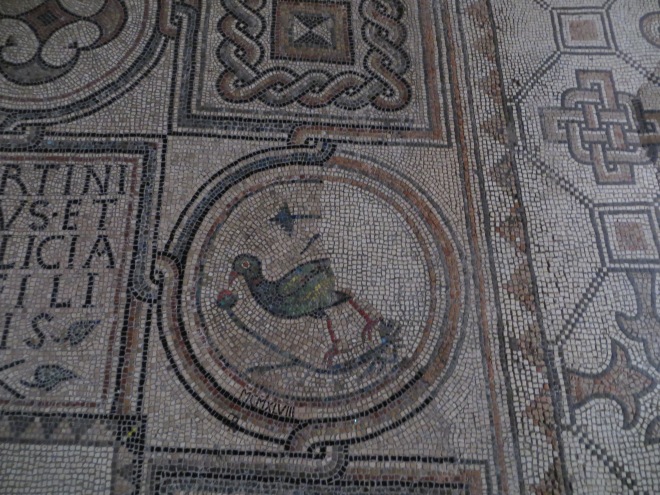 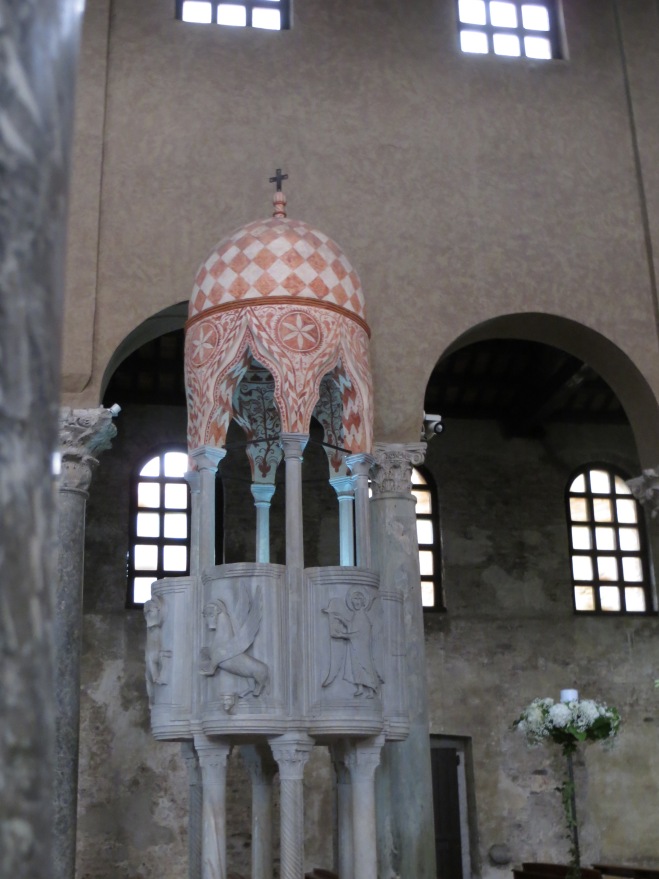 the pulpit of the basilica

Boreto is a traditional dish made by the families of the Grado fishermen with whatever fish they had to hand. There’s some garlic, oil, salt and pepper, usually, and the fish (or sometimes shellfish) is stewed and served with polenta. Depending on the fish, the flavor could at times be quite strong – as might the scent! We ate at the Ristorante Alla Pace, in the heart of their tourist district. The food was good, and it was our last outing with Gillian, who was done teaching English for the school year and would be heading back to Liverpool to consider what she wanted to do next.

And, because the world is often a cruel place, as well as containing a lot of beauty and wonder, Trieste had a vigil in memory of the 49 people who died in Orlando a couple of weeks ago. I attended and I think there were a couple of hundred other folks there as well. The memorial was sponsored by the local Arcigay group.

memorial for the murder victims of the Pulse nightclub in Orlando, in Piazza Sant’Antonio Nuovo, Trieste

Not long after, I headed out to London for the London Occult Conference. I came down with a nasty cold the day before I flew out, though, and didn’t really have the energy to cope with taking photos. Mostly I was concerned with staying upright and trying as best I could to keep my germs to myself. I did get to see two friends from Seattle, though, and a couple of friends from New York as well. I also had dinner with a couple of my World of Warcraft friends, which was fun. I’ll be heading back to London in late September for the Sherlocked con, and am hoping I’ll have a little more energy for that when I do, but my mom will be here for the three weeks prior to that, so I will probably be running my butt off to keep up with her!

And, lastly, a couple of bits of art for your edification and amusement. 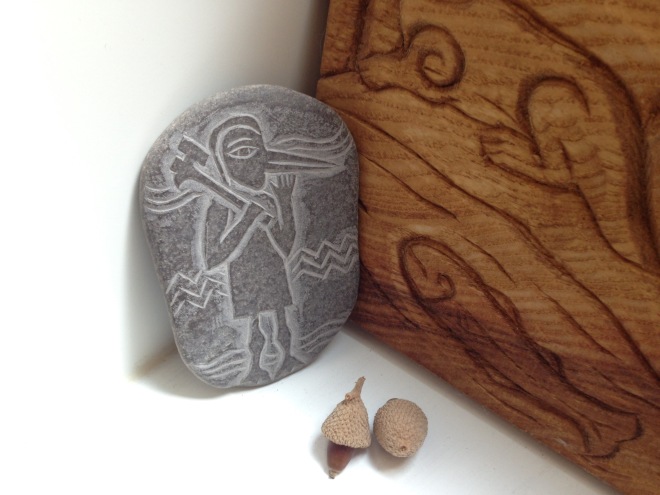 4 thoughts on “Trieste, Grado, and sliding into summer”